In the previous post I set myself the challenge of wrestling with the question: How is Jesus Christ relevant today? And I made things difficult for myself by placing under suspicion the obvious answer: ‘Because He is not only human but also divine’. Before I plough on I should probably say something about why I’m suspicious of this answer.

One interesting thing about even the most traditional thinking along the lines of ‘He’s fully God and fully human’ is the way it tends to go together with ‘But His divinity is hidden in the incarnation’. 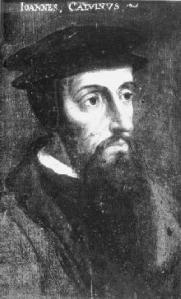 Take — surprise, surprise — John Calvin, for example. His favourite way of describing the incarnation is Deus manifestatus in carne (‘God manifested in flesh’). However, Calvin is too good a biblical scholar to let this stand unqualified. He knows that if you insist that Jesus is God manifest in flesh then you have to reckon with the lack of recognition He received — Jesus identified Himself with the God of Israel; but He wasn’t recognised by His own people!

[I]n order to exhort us to submission by his example, he shows, that when as God he might have displayed to the world the brightness of his glory, he gave up his right, and voluntarily emptied himself; that he assumed the form of a servant, and, contented with that humble condition, suffered his divinity to be concealed under a veil of flesh.

When Calvin says that Christ ‘suffered his divinity to be concealed’ it may feel like a kind of Emergency Pressure Release Valve piece of theology. But it indicates something foundational about how we should think of Jesus. We cannot — at least without risk of stumbling into the ancient heresy of Docetism — set aside His humanity in order to get at His divinity as the key to His relevance (or anything else).

Ultimately, all that we know about God we know about Him humanly — in the history of God’s gracious dealings with Israel and climactically in the incarnate life of Jesus (transmitted to us through some very human documents).

We cannot get beyond this…