The first point I made about the slaughter of the Amalekites in 1 Samuel 15 concerned its rationale. I argued that it wasn’t so much a case of ethnic cleansing to ensure the Israelites were a racially pure people as a case of divine judgement (or ‘theological cleansing’) in the service of God’s intention to renew creation, clearing a space in which human beings can dwell with him. 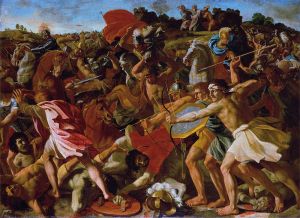 My second point develops this: God’s chief problem in employing Israel — and Israel’s anointed king (Messiah) — as the instrument of his judgement (dealing with sin by punishing sinners) is not that this wholesale slaughter goes too far but that it doesn’t go far enough.

Strap in. I’m going to try to defend this claim…

1. God’s motivation is a matter of justice, not a private vendetta or grudge. God is in the business of dealing with sin and evil. In this case, the unprovoked attack the Amalekites launched on Israel as they made their way out of Egypt. As Israel’s first enemies, the Amalekites showed themselves to be opponents of God and his good purposes (as is typical of evil in the Bible).

But is God’s judgement misdirected? The generation of the Amalekites on view in 1 Samuel 15 didn’t commit the sin for which God holds them accountable.

Although it’s a struggle to explain how it makes sense for God to regard the Amalekites as implicated in the sin of their forebears, I think we have parallels in our own experience. Take the apology Australia’s political leaders eventually offered to the Stolen Generation of indigenous Australians. Like the Amalekites, we are the beneficiaries of our predecessors’ policies. It’s our past. We’re happy claiming the myths of mateship, equality and outdoorsy-ness associated with Galipoli and the stereotypical Bronzed Aussie. And so, like the Amalekites, it would seem fair that we share in the shame — if not in the guilt — of our predecessors’ sin, which also belongs to our past.

2. But what qualifies Israel to be the instrument of God’s judgement? Are they exempt from opposition to God?

To cut to the chase — Nothing and No!

God goes to great pains to stress (over and over again) that it’s not because of Israel’s moral or military superiority that he chose them. It is based, rather, in his faithfulness to a promise he made to Abraham. And a large part of the point of the story being told in the Deuteronomic History — within which 1 Samuel sits — is precisely that Israel are not exempt from opposition to God. Persistently stubborn and disobedient, Israel and her kings are as much part of the problem as the solution.

Hence, God’s need to ‘finish the job’ himself — here in the grizzly action of his prophet Samuel, and ultimately in a king who truly and obediently represents God and Israel.

3. Then there’s my apparently outrageous suggestion that God doesn’t go far enough in wiping an entire nation off the planet.

Again, I think our moral experience and intuitions provide parallels to this. When a criminal is condemned for some heinous crime that in some cultures and contexts would attract the death penalty, why is it that we might oppose it? It could be that we don’t feel any crime ever deserves death, that we always go too far when we make that move — although the victims of many crimes, as well as their family members, would say otherwise (occasionally even indulging the thought that something worse than death is required). But I think the stronger position from which to oppose the death penalty is that it stops short at killing the offender — often without extracting a confession of guilt and definitely without reversing the wrong, redeeming the offender, or giving both victim and offender a new life.

And here too the story being told in 1 Samuel drives towards this conclusion: to deal with sin and launch the new creation, God needs to do something even more drastic and decisive than wiping out the Amalekites.