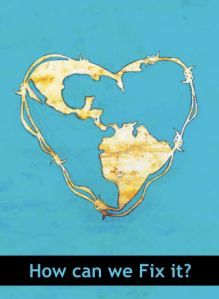 No doubt you’ve noticed that I’ve been slowly winding my way through a sort of sprawling review for James Davison Hunter’s fascinating book, To Change The World.

At times, it may have felt like I was cheerleading rather than reviewing the book.

For all that, though, some may have reservations. The call to give up on the project of world-changing by worldview formation and political action may sound a bit hasty. (Even if Hunter’s alternative isn’t so much inaction as seeking smaller-scale strategic cultural influence in pursuit of the common good.)

After reading the book, you may still want to change the world.

At least, I have my hesitations about Hunter’s positive proposal — although I continue to be impressed by his arguments for moving beyond mere politics and breaking down simplistic all-or-nothing and Win Hearts And Minds And You’ll Win The Culture approaches to effecting change.

In particular, I’m uncomfortable with the way he extrapolates from the incarnation of Christ to set the entire pattern for Christian cultural engagement.

On the other hand, I wonder whether he rushes too quickly from the utter singularity Jesus and his redemptive work to our task.

In other words, I want more affirmation and antithesis with the Christian longing to change the world. I want Hunter to show me how that longing is dead right. But how we manage to mangle it (and ourselves) by striving to realise it on our own terms rather than by looking to Jesus to fulfil it.